Plant Probiotics: What can they do for you as an Organic gardener in the UK?

Much has been said recently about the consume of probiotic foods  by humans, but not so much about probiotics in general, and how they benefit other creatures in the planet. Probiotics are supposed to help us digest our food better, so the question remains: should it not be expected that other creatures have been taking advantage of their help as well?

We know that the roots of the plants are like their digestive system, being the structures through which plants feed, so it’s no wonder that very recently scientists have started studying more closely the flora in the flora; the little organisms like fungi and bacteria that coexist with plant roots and actually help them perform better. We’ve dealt with the beneficial fungi before, and now it’s time to explore the world of beneficial bacteria (that’s what probiotics are, in the end) and how they can help you clean your soil from chemicals, improve your yields and enhance the health of your plants. Recent studies have called probiotics “a truly green revolution”, and they don’t exaggerate. Let's see why.

Time for a chart: we made a bit of research in Google Scholar, and this is what we got. The scientific interest and the amount of research done about plant probiotics grows every day! But why?

The benefits of plant probiotics (also called by scientists ‘Plant Growth Promoting Rhizobacteria’, or PGPR for short) work along three main lines: soil cleaning, improved yields and improved quality of the products. Let’s check each of them:

This microscopic image shows one of the many probiotic bacteria only recently being known: Paraburkholderia madseniana, discovered in 2016. These little beings are one-tenth the size of one of our human cells, and exist by millions on your plant's roots.

So, you see why researchers around the world are calling these little beings the beginning of a new green revolution. Let’s get to how they can help you, the organic grower, in a particular case.

Case in point: Probiotics and soil culture in allotments.

Very well: let’s say you are only beginning to work a piece of land. Let’s say that, if you’re in the UK, you also partake in the very British tradition of allotment gardening. You have applied to your local council (this is the page if you are looking to apply to one, by the way), and they have given you a plot of land. Though exceptions apply, your plot will most likely be: 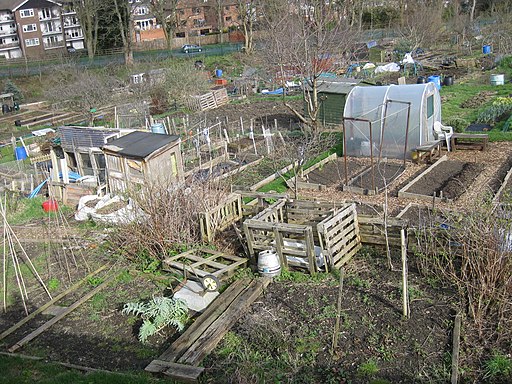 Allotments reflect the changing mindsets of their owners, and, like these allotments in Leeds, they aren't always equally well-cared for. Your allotment has probably gone through a lot before coming into your hands!

If you are also beginning your gardening experiences, or even if you’re a veteran, you will also most likely want:

These are exactly the benefits that probiotic bacteria bring to the soil! The way to attain all of these goals is, then, to begin cultivating your soil at the same time that you begin cultivating your first crops; making your soil work for you, instead of working against you. Consequently, why not introduce the probiotic bacteria that will help you attain all of these goals? The next time you plant, mix in the soil some of our organic Add Life Powder Plant Food, which includes not only the nutrients necessary to feed your plants with 100% organic fertilisers, but also colonies of mycorrhizal fungi and probiotic bacteria that allow you to begin your work with these, the gardener’s new best friends.